I’m very late to the game for talking about Jupiter Ascending, so please forgive my tardiness.

I had two realizations when I watched it for the first time. One, that I am Abratrash, even though that family is awful, and I think the direct cause is a shirtless Eddie Redmayne. And two, whenever I try to review the plot, my comprehension of it is limited to a timeline dotted with haute couture.

Everything that happens to Jupiter is illustrated by an outfit, none of which were worn by choice.

For Jupiter, the story starts with a paper gown. Manipulated by her family to sell her eggs, Jupiter goes to the clinic. She then tries to take some control of her life back by trying to get out of the procedure. The doctors do not let her, and it with that paper gown that Jupiter experiences a series of… I don’t know how else to put… non-consensual clothes.

Immediately afterward, her werewolf/angel boyfriend changes her clothes… while she’s asleep. This is a bit of a foreshadow, since next time she falls asleep on screen, she wakes up in completely different outfit… also put on her while she was unconscious. But maybe it’s okay because it’s her daughter-not-daughter?

It should be said, though, that the movie seems to be aware of this as she comments on it during her next costume change. At that point, she says that she appreciates being awake and consenting. But even if she herself is changing her clothes, the actual outfits themselves are not her choice. I’m certain that she’d prefer not to meet Titus, her “son”—but not her son, but it’s a space soap opera so go with it—in a black pleather dress that so architectural it she thought she built by Raymond Hood. The outfit is Titus’ choice, and so is the next one. 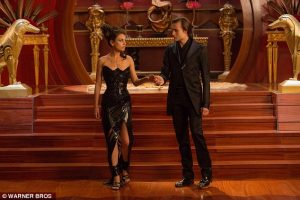 You know, the wedding dress he forces her into so he can take away all of her property rights? If you’re not thinking about feudalism and its connections to toxic masculinity right now, you might want to consider it.

Even when dressed in her more practical clothing from the police, there is no choice for what she wears. Her closet literally only has one set of clothing,

All in all, every outfit in Jupiter Ascending is a stark reminder of how we dress women up to play whatever role we need them to be. Titus needed her to be his wife, so he dressed her that way. Kalique wanted her elegant mother back, so she dressed her like that. The police needed an agent, so she wore their clothes.

There are two conclusions you can draw from this.

1. Jupiter’s wardrobe changes are indicative of her sole purpose: she is a vehicle to get a plot moving in a different world.

2. She is a savvy woman who dresses up as whatever she needs to be to survive, much the same way women in our own world have to.

I’m leaning toward the second option, though I’m not even certain the Wakowskis were trying to say anything of the like on the matter.

What’s interesting is that in the science fiction genre, it’s not just Jupiter. I want you to think back to the not-so-long ago past with Katniss from The Hunger Games. Remember Katniss? How all she wanted to do was wear dad’s jacket and illegally hunt squirrels in the backwoods of former West Virginia?

Well, with Katniss, it starts with her mother forcing her into a nice outfit for the Reaping, and it just snowballs from there. Before she even reaches the Capitol, she is coerced into Capitol clothing. When she gets there, her beautician, who ostensibly is supposed to be on her side, focuses on turning her into the Mockingjay from the first chapter they meet (though she doesn’t figure this out until the actual book, Mockingjay). His entire plot line is about dressing her up to play a part she has no interest in playing.

You might be seeing a trend here. Katniss Everdeen doesn’t want to be the Mockingjay, and Jupiter Jones does not want to be dead matriarch of the Abrasax family.

Even our strongest heroines are often forced to play a part in order to win.

In science fiction (and fantasy as well), we like to dress women up to be what we think they should be. It’s a common plot device. Sometimes I wonder if we are internalizing these outfit changes as truth but not questioning it, or if movies like Jupiter Ascending are critiquing that female truth.

As in all things, it’s probably both.

Even today, women are asked to dress in a lot of ways, usually to fit some image that someone else has of us. I can tell you about how I dressed like everyone else in the office, but was reprimanded for wearing tennis shoes like those who were paid four times as much as me. Or I could tell you how I was afraid to wear flannel shirts when they were popular in the sixth grade because I wasn’t one of the cool kids. I thought that if I did, I would be made fun of for trying to be cool, so I wore dowdy t-shirts and leggings.

I have more stories, and the woman in your life almost certainly do too.

However, this is not to say that outfit changes means a woman is being exploited. In the case of Jupiter Jones, and Katniss, it definitely is. But the opposite is also possible. Remember Margaery’s wedding dress in Game of Thrones? The one decked out in thorns that basically said “I do not like you, do not touch me. I’m marrying you for my own power-grabbing purposes”? She turned fashion she had to wear into armor, as she had been consistently doing through out her appearances in earlier episodes.

Essentially, clothing is a way women can take back power. For that, I can think of no better example than Cardcaptor Sakura.

Some of you may not be aware of this amazing manga (though some slightly dubious romance storylines), so I’ll give you a quick summary: Sakura is a young girl who has to chase down the errant cards of a long dead sorcerer that are causing trouble in her hometown. While she does this, she wears truly breath-taking outfits that her friend Tomoyo makes.

Okay, that last bit isn’t terribly important to the plot. All it does is give us things that are visually fun to look at while she’s fighting because, admit it, being a super hero is more fun with costume changes (and half the reason I play FFX-2). It also serves as a secondary way for Tomoyo to be a part of Sakura’s life, even though she can’t do magic. The outfits essentially deepen a strong female friendship, and give the characters more personality. They are about who Sakura is as a person, and not what others want her to be (even if Tomoyo can kind of stray toward that direction). Plus, half the battles she engages in are in the clothing she just happened to be wearing at the time anyway, ranging from school uniforms, and gym sweats to adorable winter coats.

The point I’m trying to drive home here is that fashion doesn’t have to be the chains that bind women, but it’s so easy to see how it does.

Sadly, I can’t really comment on Jupiter Jones’ outfit changes being a critique or a manifestation of how we teach young girls that their looks are society’s concerns. I go back and forth like a pendulum on that. What I can say is that it shows up as a plot device in stories, and I think we should be far more aware of it.